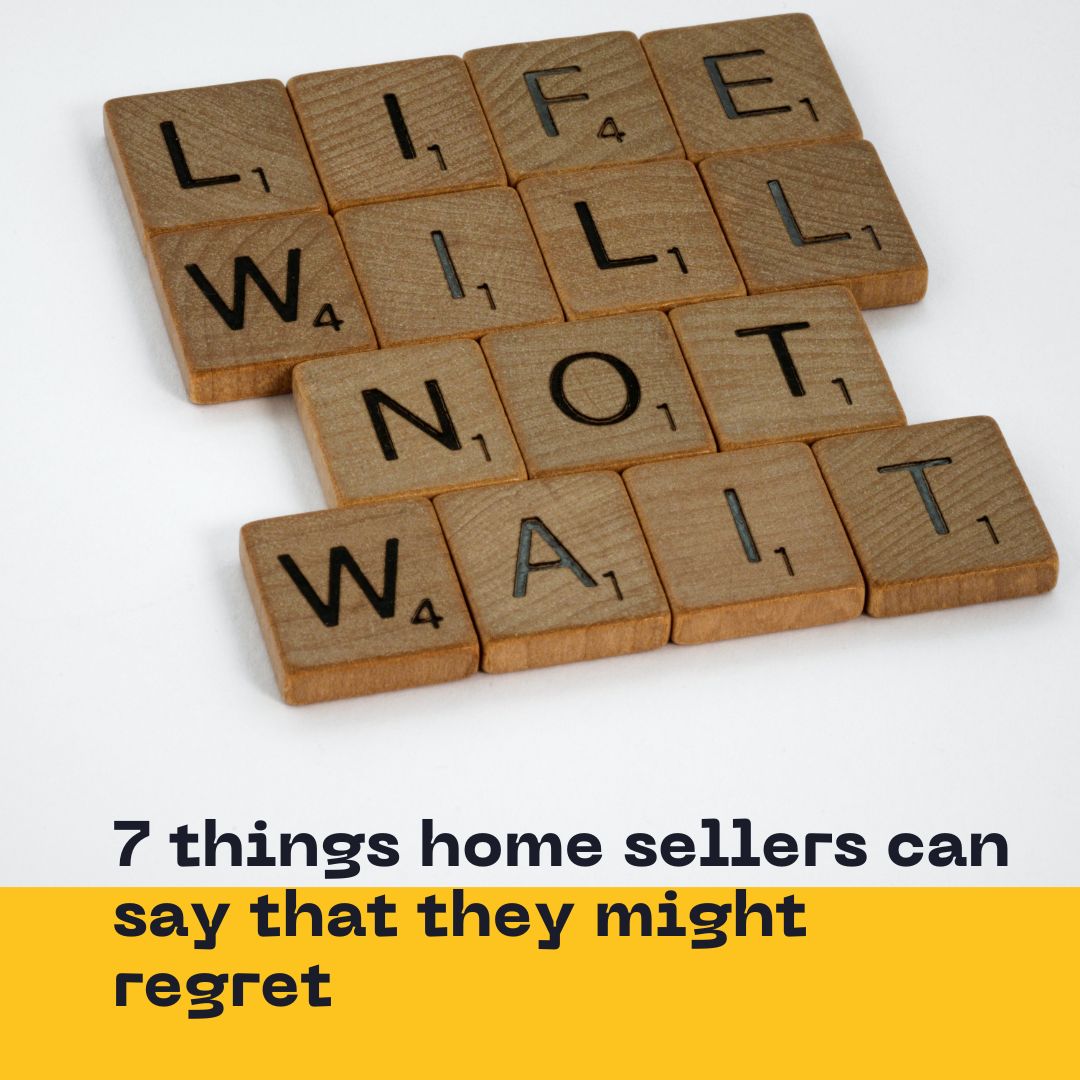 Whether the market is hot or not, there are a few things some home sellers say that they think will get them the best results, but tend to hurt their cause more than help it.

Of course, you want to sell your house for as much money as possible, and certain things sellers say are simply an attempt to do just that. Unfortunately, taking a firm stance and saying these things can cause a homeowner to defend their position even if they realize they may have been mistaken.

Here are 7 things you can easily think and feel when selling your house, but might want to avoid saying if you want to sell your house quickly and for the most money possible:

1) “My house is better than all of those houses…”

Before you list your house, your real estate agent will typically do a comparative market analysis (CMA) on your house in order to help you get a feel for how your house stacks up against recently sold homes in the area. (be wary if they haven’t done this!)

While it’s understandable that a homeowner may feel their house is better than all the comparable homes in the analysis, it pays to be objective. Each house is certainly different and yours may in fact be better in some ways than the comparable houses, but there’s a reason why the agent is comparing yours to the others.

Trust your agent’s experience and judgment. The tendency to overestimate how much better your house is than others that have sold can easily lead to overpricing your home, which can ultimately hurt your cause. It’ll likely take longer to sell than it should, and you’ll probably get less than you would have if you priced it appropriately.

2) “We should build in some wiggle room…”

Even if a homeowner sees the sense in what the data shows, and agrees with the agent’s recommendation on what the value is, some sellers still want to list considerably higher than the data supports. They want to “build in some wiggle room” so they have room to negotiate because they feel buyers will always come in with a lowball offer.

It’s a self-fulfilling prophecy when you do that. If you price too high and build in “wiggle room,” it actually forces the buyer to come in lower than they would have because they feel the need to create some wiggle room and come up in price during negotiations — if they even make an offer at all. Building in that wiggle room can actually cause a buyer who may have come in with an offer to hold off, because they don’t want to insult you.

Once again, you’re better off pricing right around where the analysis suggests. Sure, some buyers may come in with a lowball offer no matter where you price it, but by pricing it appropriately, a motivated buyer who wants your house won’t mess around!

This is pretty common to hear a homeowner say before they officially sign a listing agreement, and after having felt like they gave in on the asking price. It’s almost like a concession they’re looking for because they agreed to list their house for less than they think they should.

In a perfect world, it would be great to sell a house as-is and not do any repairs or update any fixtures. But in the real world, there’s almost always something that a buyer will want you to fix.

It’s fine to hope you can get away with digging in on any home inspection issues, but if the inspection reveals things that are wrong with the house, you need to be at least open to addressing the issues. How much you have to agree to (if anything at all) will depend a lot on how much interest you had from other buyers, as well as the negotiations that occurred before you agreed upon the offer. The bottom line is that setting your mind to selling as-is will potentially set you up for disappointment, if not the loss of a sale, when you start off with this mentality.

Too often a seller will forgo a solid offer, hoping to get a better one if they just wait and keep the house on the market, only to find that every offer in the future isn’t as good as the first one. Unfortunately, other than turning back time, there’s not much you can do but settle for less than you would’ve gotten if you’d taken the first offer.

A lot of times sellers do end up listing their house at a higher price than they should have, and after a few weeks the initial buzz of buyer activity slows down. No offers from buyers after the first couple of weeks (let alone months), and fewer showings usually mean it’s time to consider reducing the price.

When a price reduction is suggested, some homeowners firmly claim they’re not reducing their price…not now, not ever. While you may eventually get an offer and come to terms with a buyer having stayed listed at too high of a price, the chances are minimal. Eventually, most sellers do come to terms with having to reduce their price, and once they do, the house usually sells if they reduce it to the appropriate amount.

Save yourself time, aggravation, and money by reducing your price as soon as the market shows you there’s no interest at your current price.

Ultimatums rarely work well in any negotiations, but a lot of people feel like that’s the way to get what you want.

While most buyers aren’t seasoned negotiators, they won’t just roll over and accept whatever terms you want just because you say they can either take it or leave it when you reach the point where you want to draw the line. If you tell them to take it or leave it, there’s a good chance they’ll opt for leaving it.

Rather than offer this ultimatum and losing a potential buyer, think of smaller concessions you can make and continue the negotiation process.

When a seller is frustrated with a lack of activity, no offers, or a low offer, they often say something along the lines of, “I don’t need to sell…” What they’re basically saying is, “If I can’t get what I want, then I just won’t sell.”

Okay, fine. But if it gets to this point, it’s probably a combination of every other thing mentioned above, and the seller just won’t budge from their own point of view and deal with things as they are. If they truly feel that way, and they don’t want to listen to good advice, then not only do they not need to sell, they probably won’t be able to sell their house.

While it may not sound like a big deal, with the history of how many times a house is listed (and for how long) readily available online, it can hurt the seller down the road. Buyers look at that data and it affects how they think and feel about the house in the future. It can lead to getting less for the house than they should have or would have, just because they put their house on the market and let it linger because they weren’t truly motivated to sell.

So if you don’t truly need or want to sell your home, you’re probably better off waiting until you do.