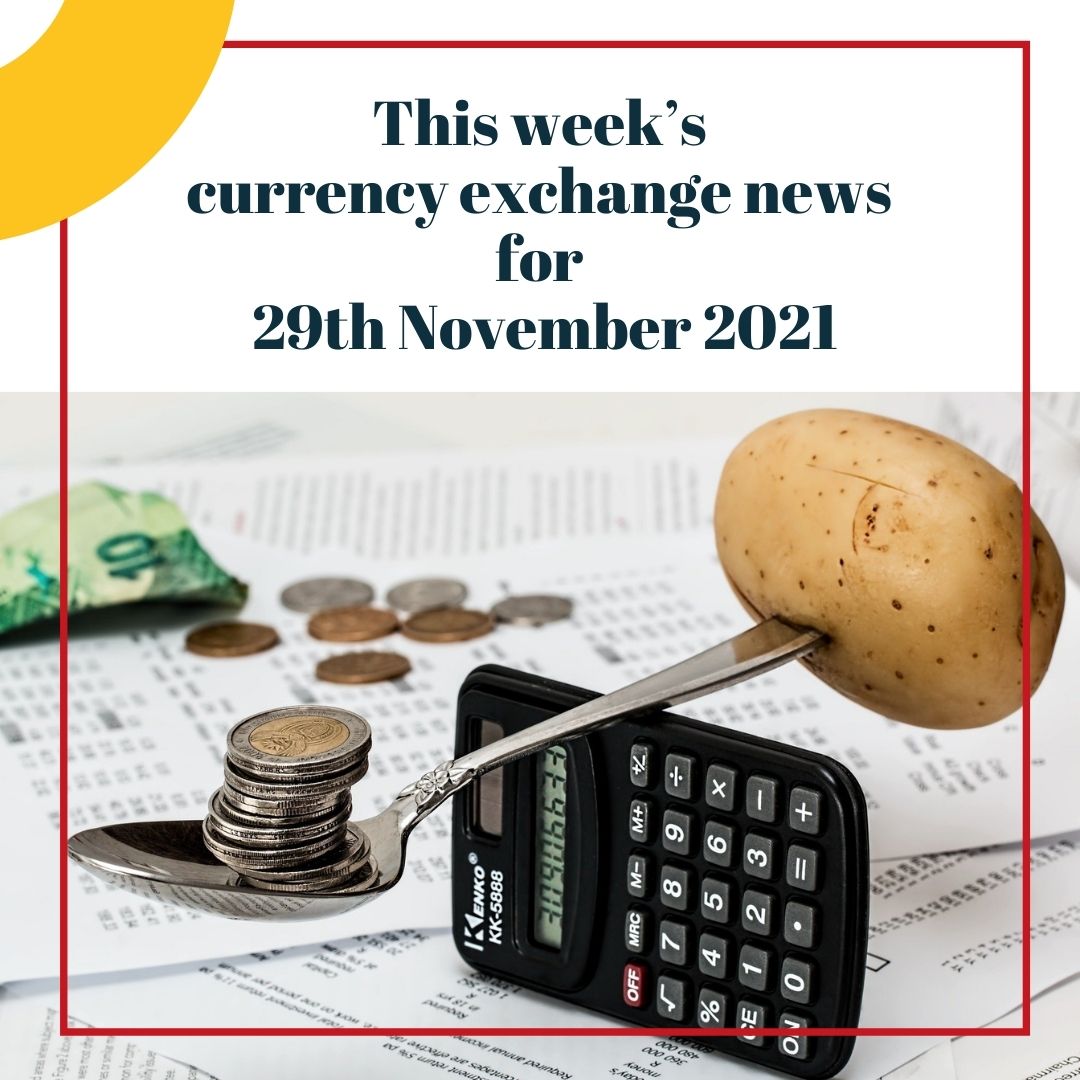 Market sentiment got hit for six last Friday as worries over the Omicron variant of Covid surfaced. As London is a major world travel hub, the UK is particularly vulnerable to this new variant, and traders fear that the economy would also suffer from further disruptions. The UK Government was amongst the first to react in taking rapid precautionary action by adding several Southern African countries to its red list of travel restrictions. With a relatively thin market with many traders taking an extra day’s holiday, the dollar needed little encouragement to gain as risk sentiment soured. Sterling suffered more than most, falling initially quite sharply against the dollar and the euro, although it has recovered some ground this morning.

The market’s focus in the week ahead will sadly once again be focused on Covid. One of the many questions that remain unanswered is whether vaccines will prove effective. With the European Central Bank already stubbornly reluctant to alter its policy course and with an increasing number of European countries entering lockdowns, the euro will again remain vulnerable to the mighty dollar. Apart from the omnipresent Brexit discussions, which look set to drag on past Christmas, and Covid, the markets will be watching the slew of employment data due in the US this week, culminating in Friday’s Nonfarm payroll (NFP) data. Another strong NFP figure looks set to cement an increase in the monthly tapering by the Federal Reserve, potentially making the dollar more attractive.  With month-end tomorrow and liquidity returning after the holidays, the markets look set to be volatile at the very least and once again, the world’s stock markets may lead the currency market.

GBP
Sterling took several steps backwards last week as traders became more sceptical that the Bank of England will raise rates on 16th December. Previously the pound had been enjoying a premium over most currencies, including the euro, as traders anticipated a series of hikes in base rate to help combat inflation. The emergence of a new variant could damage the economy just as it’s recovering and has complicated the Bank of England’s task in the weeks ahead, leaving sterling a little vulnerable. With Brexit discussions seemingly sidelined for the time being and little macroeconomic data for the markets to get their teeth into, Covid will be the focus for much of the week apart from Wednesday when Purchasing Managers Indexes. There are several speakers from the Bank of England this week, including Andrew Bailey, Michael Saunders and Catherine Mann and the tone of their speeches is likely to impact the market.

EUR
The euro staged a small recovery on Friday as US Treasury yields fell on the news of the potential dangers of the new Covid variant. The euro is benefitting from the markets repricing risk and lessening the chances of tightening by the Federal Reserve. However, as with all the G10 currencies, the euro is at risk from the Omicron variant, and one of the many unanswered questions is how far the variant has spread in Europe. The data week kicks off this morning with Eurozone Sentiment readings and the German Consumer Price Index. Tomorrow German Unemployment data is released as well as November’s Consumer Price Index. Wednesday sees October’s Retail Sales from Germany and Markit’s Purchasing Managers Indexes for all of the blocs. Thursday Eurostat will release the EU Producer Price Index and Unemployment, and the week closes out with Markit’s Composite and Services PMIs for the region and Eurozone Retail Sales. As elsewhere, central bankers have a full schedule of speeches starting this morning with Luis de Guindos and Isabel Schnabel. They are followed on Thursday by Fabio Panetta and on Friday by ECB President Christine Lagarde and its chief economist Phillip Lane.

USD
Usually, thoughts in the first week of the month are totally focused on ADP’s latest unemployment data updates and the US Labor department’s. However, with the impact of the latest covid variant still an unknown, their influence may not be quite as significant as usual. With the Federal Reserve already tapering its asset purchase, a solid Nonfarm Payroll number will give rise to thoughts of a quickening in the pace of the policy unless news on the variant has the upper hand. Early estimates are for a headline number of around an increase of around 500,000 jobs. The rise in employment only really tells part of the story as there are, almost unbelievably, 10 million vacancies. The imbalance between the two numbers will continue to push wages higher and keep pressure on the Federal to call a halt to the days of easy money. A busy week for data this week starting tomorrow with Consumer Confidence. On Wednesday, ADP releases their private payrolls report and the Institute for Supply Management their Purchasing Managers Indexes (PMI) for Manufacturing Thursday the weekly jobless total and Friday NonFarm Payroll as well as  ISM Services PMI surveys and Markit’s Composite and Services PMIs. There will be plenty of opportunities for speakers from the Federal Reserve to keep markets posted of their views this week starting tomorrow when Jerome Powell and Treasury Secretary Janet Yellen testify to congress, and Richard Clarida also speaks. There is then a lull until Randal Quarles on Thursday.

Scandi
As beta currencies were sold off on the back of renewed pandemic fears and stock market corrections, the Swedish krona became one of the worst-performing G10 currencies last week. This, despite the fact that Riksbank Governor Ingves communicated to the market that the main repo rate would most certainly go up in 2024. The market is therefore expecting short term shocks and data to have more of an impact in the short term than any future guidance from the Riksbank. Today we will get the latest GDP figure, and on a quarter-on-quarter basis, the Swedish economy is expected to have grown 1.8%.
The Norwegian krone followed its neighbour southwards, and its decline was egged on by the USA’s decision to sell 32mln barrels of crude.  Today we will get the latest Daily FX Purchases stats from Norges Bank, and on Wednesday, the latest Current Account Balance figure is published. On Friday, the unemployment figure for November is posted. It is expected to have come down by 0.1% to 2.1%, making it one of Western Europe’s lowest.