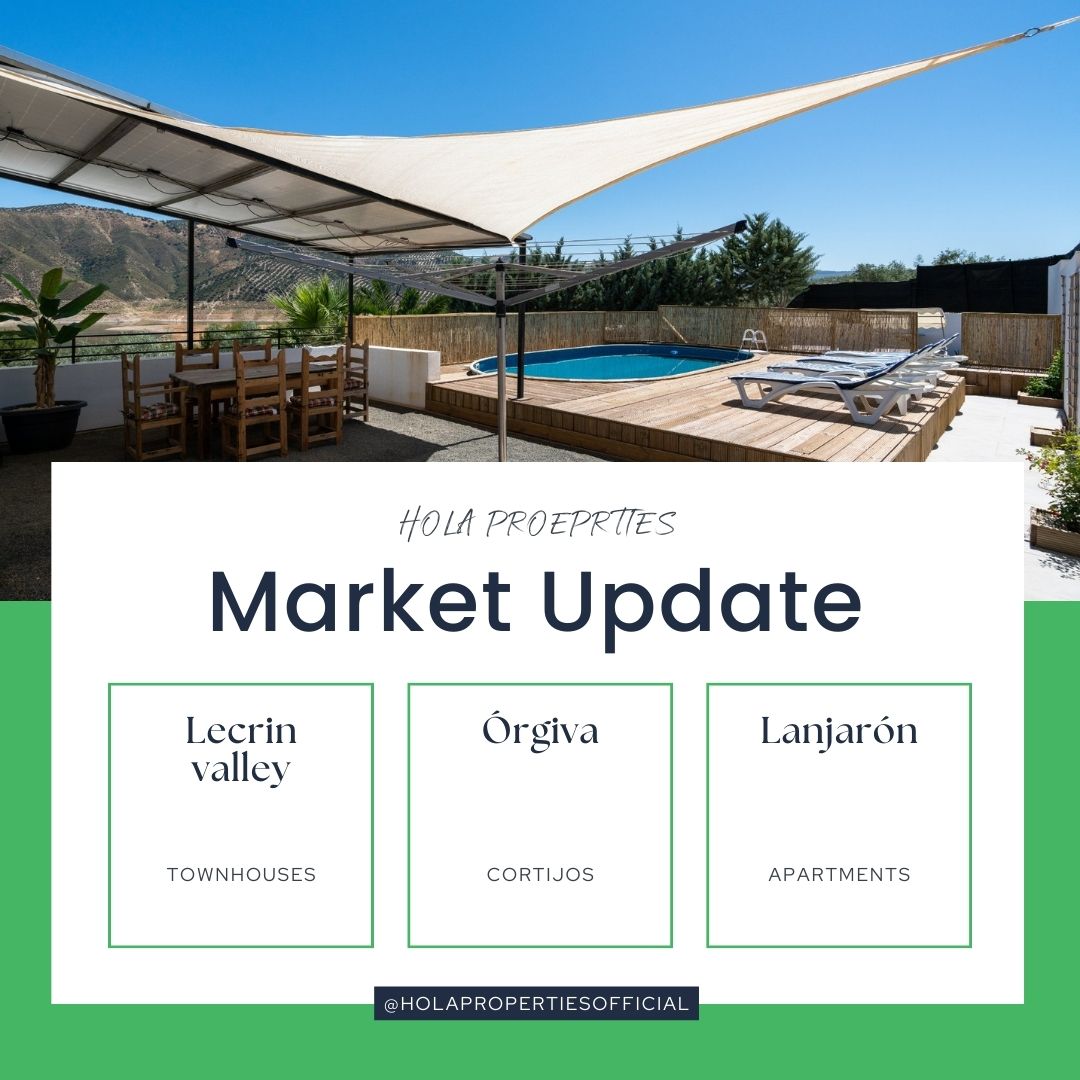 Local Property Market Report for Lecrin Valley Property, Orgiva Properties and Lanjaron Property – Get up to date on the latest news, fact and figures.

As normal we will have a quick look at the facts the figures the latest news affecting the market, and what’s the sentiment in the market for the rest of the year.

Let’s start off with the figures for the local area starting with Lanjaron.

There were 61 properties available for sale last month with an average asking price of 95 000 Euros or just over 700 euros per square meter.

Over in the valley, in the village of Lecrin, there were 26 properties available for sale with an average asking price of just under 145 000 Euros or 1082 Euros per square meter.

So what’s happening across the International markets at the moment? We live in an area in Granada where there are many international buyers and although the Spanish Market is still strong at the moment it’s the international buyers that are leading the way in particular this. We’ve seen strong demand from U.S buyers, particularly through the Realtor Association where linked offices across America are calling us daily with inquiries of people looking to move. Why are we seeing such an increase? Well, the Dollar’s been very strong against the Euro, at one point in the last month it reached 1.05 Euros to the dollar. This morning as we look at the figures it was 1.02, so it’s fluctuating around that but has really been well above parity for several months now. In addition, the U.S housing market has gone over the curve and we’re seeing quite significant falls starting to happen there.

Many people are bringing their move forward to capitalize on that and with the exchange rate, this has seen a big increase in demand, in particular increase for video tours of properties as this is something that’s pretty normal in the US and so there’s a huge demand to see these.

The Northern European markets have remained fairly resilient despite much media attention about prices potentially falling next year. I guess if you predict it long enough it’s going to happen as the market is always cyclical. Anyone who’s been around for more than 20 years will have seen cycles in the market before, but why are the markets so resilient at the moment? Well for Northern Europe there are two main issues really, one is there’s actually a lack of available stock. There is still more buyer demand than there are available properties for sale. In addition, as interest rates have gone up it’s very traditional in most northern European markets to have fixed-rate mortgages for the term of the mortgage, unlike other countries where people swap and change their mortgage rates regularly. This is not that common in Northern Europe and so if you own a property with a long-term fixed-rate mortgage then actually interest rates aren’t really having much impact. Inflation pressures on the cost of living and interest rates for new buyers entering the market does have an impact and potentially over the longer term, we will see more of an impact. In addition, the ECB has not raised rates as significantly as markets like the UK or the US for example.

The UK Market has still remained fairly resilient again due to this lack of stock and of course many existing homeowners will have fixed-rate mortgages. What will happen when they come to an end and need to remortgage? We will have to wait and see and most of the predictions in the market are that there will be around a 5-10% fall over the next two years in asking prices across the UK. How this will affect sale prices we’ve yet to see and speaking to colleagues in the UK there’s still strong demand for property, albeit there is a concern with interest rates rising, but the predictions are that this is going to curb the inflationary pressures and so it’s only expected to be a short-term issue, in addition, this is not dampened demand from UK buyers for properties in the Granada Province.

One of the reasons for that is similar to the US where house prices have been rising quite dramatically in the UK over the last few years and now they’re peaking people are looking to capitalize on that and bring forward their Moves In addition there was some fluctuation over the last few months with the pound to Euro but it’s looking like it’s stabilizing and so that gives a little bit more confidence to buyers coming over from the UK. The other thing we are seeing is buyers who are looking to be here longer term not just holiday home buyers, so there’s been a bit of a shift in demand and that in turn creates a shift in what people are looking for. It’s really important to understand that in some more detail, I won’t bore you to tears with it here but if you’d like to know more, just get in touch ad we can have a chat in more detail about it.

IRPF & Plusvalia – Purchase taxes and sales taxes in Spain, which I think we know are quite expensive compared to many countries. Let’s focus on the sellers one which is the capital gains tax and the Plusvaia, which is a local Town Hall tax. The capital gains tax is set at a regional level by the Junta de Andalucia and so there’s not a lot that can change in that, but, the Plusvalia is set at a local level by the Ayuntamiento. This can change quite significantly based on the areas that you’re in and those of you who follow us regularly will know that earlier in the year there were some changes to the Plusvalia where first it was abolished then a new tax was brought in to replace it! Well, from the 1st of January 2023 the Town Halls are going to have free reign to set the rates that they want to and this could increase this by up to 50 percent! Whilst there are no set figures yet it will be interesting to see how this rolls out over time. So, if you are selling a property in Spain it is very important to try and capitalize on that before the end of the year as your selling cost might increase quite dramatically should your local Ayuntamiento decide to increase the Pusvalia. Make the most of this. The other thing to be aware of is that if you’re a non-Spanish tax resident then the buyer will also have to pay a 3% retention based on the purchase price. as ever tax advice can be very individual to each person so it’s always best to contact us for some more detailed information about that and we will happily help you.

Some good news for a change the digital Nomad visa and startup business visa has been set for approval. It’s past the first stage with the Spanish government and it’s actually set to come into force on the 1st of January. There is a window of opportunity for the government as there’s a new tax regime in line with the Spanish budget and that was the opportunity for them to bring this in and capitalize on that. At the moment there are still some final details being tweaked, but in essence, it means that new startup businesses can qualify for a 15 % tax rate and digital Nomads can also qualify for a 15% tax rate in Spain, and be taxed based on their home country’s income tax rates. Initially, it’ll be for one year with a possibility to extend further, the final details will be coming but it’s definitely something we’ve been waiting for for a long time and could be a huge benefit to the Spanish economy. It also brings Spain it into line with today’s digital world and particularly places like Greece, Italy, and Portugal who’ve had these visas in place for a long time and have been benefiting from them hugely. Personally, I think this is a great benefit to Spain and we’ll see an influx of people looking to come here for the medium term with the potential to stay longer once they’ve established a base here. n 2015 the OECD ranked Spain as one of the worst countries in the world for starting a business and having done that a few years ago I can see why, but this will improve things quite significantly, especially for new startup businesses. Let’s wait to see the full details, but this is now anticipated to go live on the 1st of January so we’ll bring you more news as and when it happens.

Finally, the clocks have gone back and we all enjoyed an extra hour to spend the other Sunday but what does this mean for the property Market? Well, interestingly it always brings a sharp increase in inquiries particularly from northern Europe as things start to get dark around four or five o’clock in the evening and the weather’s not been great across Northern Europe the last few weeks. People are yearning for the sunshine that we have here in Andalusia and the lifestyle that brings. This leads to a great increase in inquiries over the last few months and we’re anticipating to see that continue through until December. As we enter December northern Europe tends to go into holiday mode or Christmas holiday mode and so it’s important to capitalize on that market now if you’re in the market looking to sell before we reach the January and the spring rush. So don’t forget the clock’s going back might seem a little bit of a sad thing but actually is very, very good for those looking to sell a property.

If you have any comments or questions please feel free to add them below we’re always interested to hear them and if there are any subjects you’d like us to cover for you don’t hesitate to ask.